Week 2 - It's Not Easy Being Green 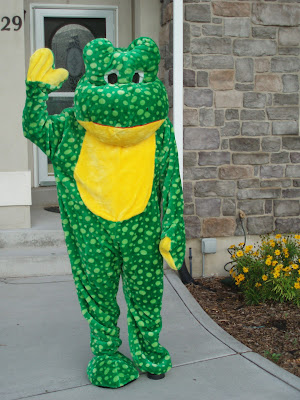 "If God had wanted us to be concerned for the plight of the toads, he would have made them cute and furry."
-Dave Barry 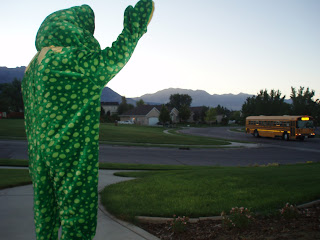 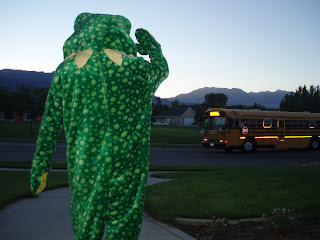 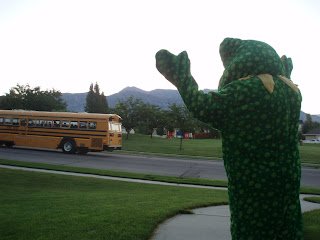 A new tradition. Each Friday I'll pick a (possibly favorite) wave photo from last year's corresponding school week and share it with you, along with some additional commentary. This first week, our favorite wave photo goes out to Anakin Skywalker. We could say it all began when Dale and I innocently waved at Rain's bus on Day One. Or we could say it all began when Dale quietly declared "game on" and donned the Chargers helmet on Day Two. But really it was Day Three that got the waves going. It wasn't until Day Three that I pulled out the camera and said, "I've gotta take a picture of this one!" [The Chargers helmet just wasn't that far out of character for Dale. He and his brothers have been known to gather around the TV in their Chargers jerseys. They even have some game where they take turns wearing the helmet. Not quite sure of the rules on that one.] And yes, that does mean the photo for Day Two was a "retake." I missed the original shot, so I made Dale change into the Charger's clothes from the day before for a photo.
And where did the encouragement come from? Facebook friends, of course. Before there was the blog, there were chuckles on facebook. Here's the first post: 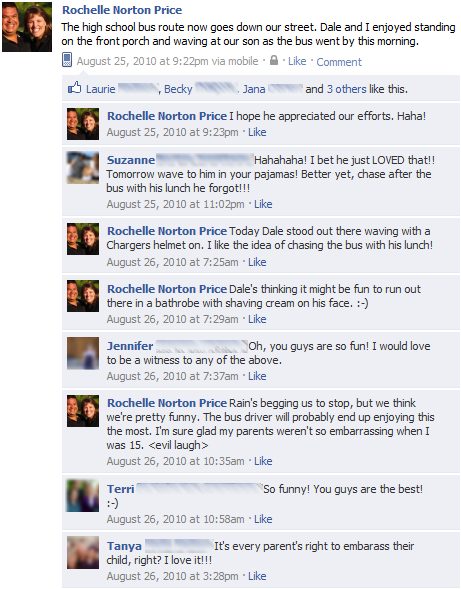 Then it was officially the start of the blog. With fun encouragement from one of my sisters, Suzanne, I spent about 15 minutes creating the blog on Friday morning (the third day of school). 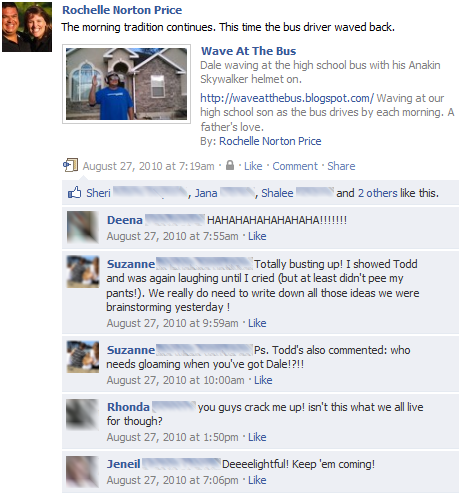 So today's Flashback Friday Wave goes out to Anakin Skywalker. The Force was stronger than we knew. 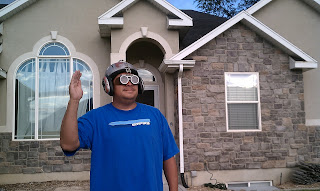 We were a bit surprised last month when our neighbors came running over with a copy of the National Enquirer. Who reads that newspaper?? Ruth and Mark say they got it from a relative who happened upon it in their break room at work. Not a newspaper my company keeps in our break room.
We were even more surprised when they flipped it open to pages 18 and 19. There he was, somewhere between Arnold and Anthony... my husband, Dale Price. You'd think they'd broken the story, and they really could've made it good... "Man caught with his shorts around his ankles, waving at the bus." But no, this time the headline read: "Dad's Crazy About His Kid!" Not really something to be ashamed of. Yes, they simply regurgitated the story that was originally told by our local papers and news stations. Nevertheless, "you know you've made it big when..."

Fame and fortune don't always go together. In Dale's case, he got a little fame, but we're still waiting on the fortune.

Week 1 - The First Day of School

﻿﻿As of a couple days ago, Rain wasn't going to ride the bus this year. As the school year got closer, he changed his class schedule and his plans and he'll probably be riding the bus at least half the time. Then the bus schedule was finalized and posted online. As Rain's facebook status points out (above), they changed the route again! Last year he got on the bus at the top of our hill, then rode past our house. This year he still gets on at the same stop, but the bus (with a different driver) approaches the neighborhood from the opposite direction and goes UP our hill to pick him up. He won't be on the bus when it passes our house. Now some of you have suggested that Dale should wave at the bus even if Rain isn't on it. Wouldn't that just make Dale that "creepy guy" waving at kids on a bus?
Another option: the bus stop before our house is a little farther (and the other direction) than the stop Rain usually gets on. This would require Rain to leave the house a bit earlier in the morning. We'll try to convince Rain to use that bus stop once a week.
Some movies should never have sequels. And some projects were never meant to be re-created. We'll see how this shapes up. In the meantime, here are Rain's traditional "first day of school" photos:﻿
﻿
﻿﻿
﻿﻿﻿﻿
﻿﻿
﻿
﻿﻿﻿


When Ryatt woke up this morning, I gave him a hug and kiss and reminded him that today was his first day of school (2nd Grade). He smiled and said, "the moment of truth!" (seriously, the first words out of his mouth). Ryatt's first day of school photos:
﻿
Posted by Ro at 9:30 AM 6 comments:

Rain and I went for a bike ride on Saturday. He's working on his cycling merit badge (for Boy Scouts) and needed another 25 mile ride. We headed out towards Utah Lake, riding through the farmlands. As we neared what is sometimes called the "Bus Barn." Rain hollered over to me, "Look, it's where the buses are born!"

This post isn't "Dale's leg amputation story" (although I will get to that someday). We watched the movie Soul Surfer tonight and I thought I'd post a few thoughts about it while it was fresh in my mind. First of all, it was an inspiring, feel-good movie. Dale was born in Hawaii and we love the beauty (and feel, and smell, and TASTE) of the islands. But Dale didn't enjoy the movie.

It's been 19 years since he lost his leg (in a motorcycle accident) and a lot of the details have faded with time. This movie brought many of them back. Some of the pain points were obvious to me, others were more personal to him. When Helen Hunt (the mom) receives a phone call and then speeds towards the hospital, I felt that. Following the ambulance to the emergency room, not knowing if your loved one will live or die, well yeah, I felt that too. Watching as Bethany (lying in the hospital bed) reaches over to where her arm should be, only to feel the void, well that's worse in real life.


After "the accident" Dale picked himself up and carried on, playing in a paintball tournament (on crutches) just three weeks later (ignoring the ooze of the wound). Then a couple months later he wore his "first prosthetic" for a softball tournament. He had been pitching from a wheelchair, but for the championship game he really wanted to stand on his own (without crutches), so he duct taped a 2 by 4 to his stump and pitched the game "on two legs."

Life does go on. And yet life is never the same, for the disabled or their loved ones. Dale has become an expert at explaining his "robot leg" to kids in the grocery store, but no one in our family gets used watching him suffer through very real "phantom" pains.

I guess what I'm getting at here is that sometimes it takes a movie to remind you of what a gift life is. And sometimes all it takes is watching your husband put on his leg in the morning.

I have a cousin named Ozz. It’s not the name his parents gave him, but crowned upon him by one (or more) of his six brothers (just guessing that it wasn't his sister). These are the same cousins that gave my little brother the name "Dee," although he doesn’t have the letter "D" anywhere in his name. Ryan = Dee and Tom = Ozz. Go figure. My cousin Ozz grew up near us in San Diego, California, but now lives in Utah, too. Last month Ozz (aka Tom) provided me the key to his house so I could pick up a classic turntable/stereo console that once belonged to our grandparents. Dale was thrilled when I opened the garage door and revealed "the surfboard." Not just any board, but a much loved and used board. This would’ve made a good prop for one of the "170 Days" of waves.


Dale once said, "You never know what you'll find in your neighbors' closets." We can extend that to their garages as well. Here’s waving at you, Ozz!  I hope we remembered to shut your garage door behind us. 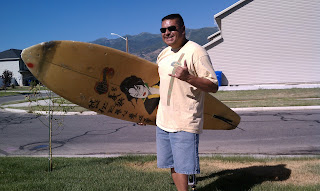