In the past, we have had some busy 4ths, like 2011's fence building and couch riding (How We Spent Our 4th of July Weekend) and 2012's marching, Rikki's injury, and fancy-dancy cakes (Happy 4th of July!), but this year was a little different, except another injury by Rikki, but we won't remind her of this correlation!

This year we were able to have one of Rikki's... "friends" over. You know, the type of friend who proposes and steals my sister to the depths of... lovey-dovey stuff. Yes, we're going to have another member of this wild and crazy family! His name is Zakk. See, this is him and her. 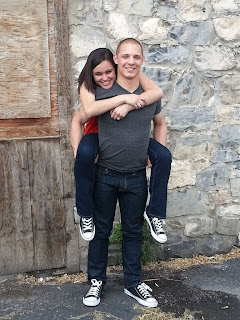 He's in the Army (adding to our patriotism for this holiday)! He had a one week leave, and he came for a visit from Alaska. We were able to get to know him better before he proposed; he might be able to survive this family's insanity!

Right before their engagement photos, as in, an HOUR before, Rikki managed to hurt herself. She caught her finger on a razor when reaching for her toothpaste and ended up in an urgent care center. I'll spare the details, but before she was in the center her bandage looked like this: 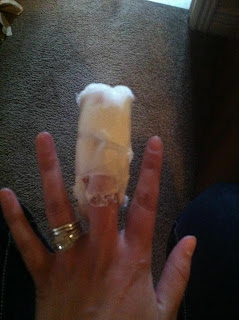 They worked it out with the photographer, who also happens to be a family friend, and rescheduled the pictures for the next morning. That's where that picture of them came from, except that picture was taken by my mom during the photo shoot. She's the same photographer that did my senior photos - which are amazing! Here are my photos and her website:

And here's a link to Rikki's engagement photos: