Growing up and moving out. We wrote our original "The Family" post in June 2011, and now it's time to update the blog with a new family photo and status. 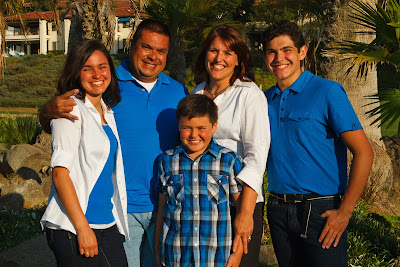 Ryatt aka Riot (little story there, but Dad spells it one way while Mom spells it the other way) is now in fourth grade. He has recently discovered a love for camouflage and can't wait to get a set of real dog tags from his future brother-in-law, Zakk. Ryatt loves karate, football, reading, video games, and listening to his dad's funny stories.

Rain is moving out on Thursday. Really far out. He's headed to Liberia, West Africa to serve as an LDS missionary for the next two years. We'll get emails weekly (if we're lucky), and phone calls on Christmas and Mother's Day. You can read Rain's mission blog here. Rain graduated from high school with high honors, earned his Eagle Scout award, and will head to Brigham Young University when he returns from Africa.

Rikki is now a senior at Utah State University, majoring in Management Information Systems with a minor in Computer Science. She's engaged to be married later this year with plans to move to Anchorage, Alaska after college graduation in May.

Rochelle continues to work at ProModel Corporation in Orem, Utah, with occasional trips around the country and globe teaching engineers. She ran her second marathon in May, in the rain, somewhat slowly.

Dale is entering Halloween season a little behind his normal decorating schedule due to Rain's mission preparation activities and our various family reunions and get-togethers. When he's not making us chuckle (or laugh out loud), Dale's fixing cars and ATVs, driving Ryatt to karate, coaching Ryatt's football team, working on the yard, or working out at Ultimate Peak Crossfit.

Originally posted as Clarifications and Explanations on 5 June 2011:
We enjoy reading the comments posted here on our blog. We have read each and every one. Thanks for the enthusiasm. We feel that we may need to clarify a few things.
Cost: We have spent less than fifty US dollars on costumes and props for this blog. Most of these costumes were borrowed from neighbors and friends (you’d be surprised what your neighbors have in their closets!), or found in our own costume boxes from years past.

Other children: Yes, we have other children. Our oldest, Rikki, is a sophomore at Utah State University. She is majoring in Computer Science. Our youngest, Riot, will be entering 2nd grade next year. He does not ride the bus. You can see him joining in the waves on Day 26 and Day 128. Rain is the middle child and does, in fact, like his name. His full name is Makani Rain Price, but he has gone by “Rain” for most of his life.

Photo by Nathan Petty
About Rain: He is genetically predisposed to having a good sense of humor. He’s a fun, likable guy, with a 4.0 GPA in Honors classes. He plays the trumpet in the American Fork High School Marching Band (state champions). He’ll be marching in the 2012 Tournament of Roses Parade (in Pasadena, California on January 2, 2012). And he’s on the verge of earning his Boy Scout of America "Eagle Scout" award. And yes, he did laugh at the waves. If you look closely at some of the pictures, you’ll see that he and his friends were waving back. He knows how to laugh. He’s a great kid.

Guns and camo: Some have wondered about the many posts of Dale in camouflage, and the pictures with guns. Dale used to own a chain of paintball stores, aptly named “Pegleg Paintball.” Being in the paintball industry for over twenty years, he has accumulated quite a variety of paintball clothing and, let’s just say, a few paintball guns. He’s an amazing airsmith and has fixed just about every paintball gun ever made.

Dale: is now a stay at home dad, actively parenting our three kids. He’s a pretty decent mechanic, landscaper, housekeeper, trophy husband (complete with a kickstand), and an amazing dad. We've been happily married for over 22 years.

Rochelle: I have an M.S. degree in Manufacturing Engineering from Brigham Young University. I’ve worked at ProModel Corporation for the past twelve years. I enjoy running, cycling, and laughing with my family. I took the pictures, found silly things to say about them (although many left me speechless), and posted this craziness to the blog.

Political correctness: We realize that many of these waves are not politically correct. We never claimed to be PC. For goodness sake, it’s humor people. Good thing we aren’t running for office of any kind. Although we did get a laugh out of a recent Tweet that said Dale should be “Ruler of the World.”
-Rochelle