Week 34 - Devil in the Details 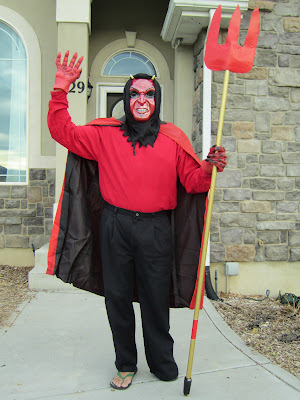 "It is wonderful how much time good people spend fighting the devil. If they would only expend the same amount of energy loving their fellow men, the devil would die in his own tracks of ennui." -Helen Keller 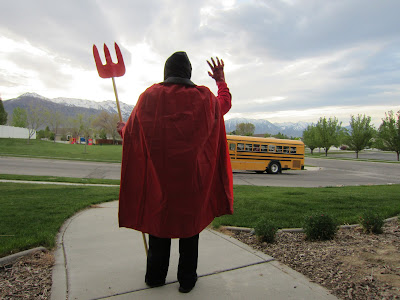 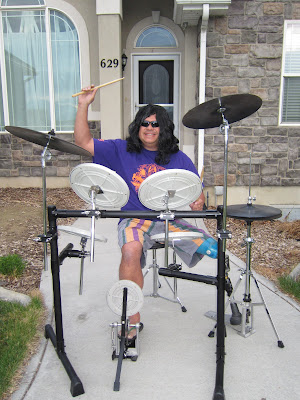 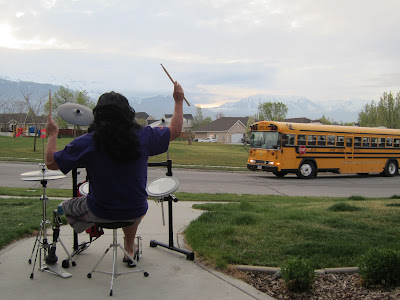 We celebrated Rain's birthday a few days early (while we were in San Diego), with a stop at the Corvette Diner--Rain's favorite, and not available in Utah. Fun atmosphere and good food! 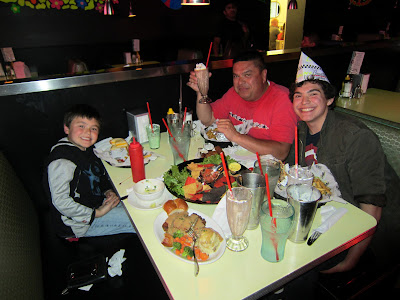 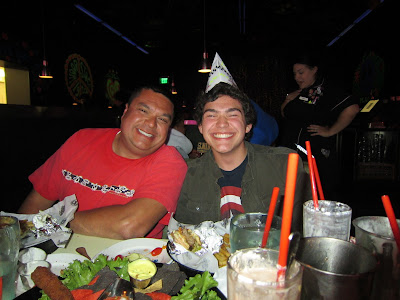 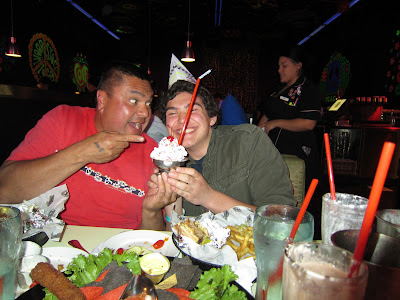 We are playing a bit of blog "catch up" after taking the boys to visit their grandparents over Spring Break (no school = no bus wave!).


One funny event from our trip occurred on Wednesday afternoon while at a San Diego Padres game. We were sitting in the bleachers and Dale's smiling face appeared on the stadium big screen. Dale, of course smiled and waved. A minute later my cell phone started ringing. A friend of mine (from Utah) was also visiting San Diego during Spring Break. She was at the ballgame with her family and saw Dale waving on the 80 foot screen. Small world.

We'll continue to share more of our "making of the Torihada show" experience on upcoming Behind the Wave podcasts, along with many other stories from our lives. Listen in from our blog here, subscribe to the feed in iTunes, and if you like what you hear, please give us an iTunes rating and comment!


So, back to Torihada (the Japanese reality show)...


Was it worth it? Absolutely. Leading up to the event, we weren't quite sure. In the U.S., television stations frequently edit reality shows to portray families as something they are not. When you open up your life and home to a reality show, you open yourself up to the possibility that the editors will misconstrue situations and make you appear at your worst. We are quite open about ourselves, and hoped the life experience would be worth the exposure. As the film crew left, we felt like it was worth it--just for the new friendships we made during the days of filming. Plus, the opportunity and catalyst the show provided for Dale to go skiing truly made it life-changing.

Now that we are seeing the results of the broadcast in Japan, we continue to be pleased with our choice to participate in this production. We love hearing from our many Japanese fans. Many notes and comments apologize for their poor English skills, but no apologies are needed--our Japanese is not nearly as good as their English. We love the kind words that have been shared here in the comments on the blog, as well as on facebook. We don't always have time to reply, but we read them all. Keep the comments coming... and you may find yourself mentioned in the listener feedback section of a future podcast.
Are we done talking about it? No!
Are we done waving? Absolutely not.

We were asked if we could do a family activity together for the cameras. Dale offered for us to all play paintball (his favorite activity). The producer agreed, but asked if there was anything else we could for the cameras. Well, March in Utah does not lend itself to many typical outdoor activities, especially one-legged ones. We like camping, but it's still winter, and we weren't about to take a camera crew with us snow camping. After a little brainstorming, I asked Dale how he would feel about skiing--for the first time since losing his leg 20 years ago-- in front of the cameras. He agreed, and so did the producer. Now we just had to figure out the logistics. This was Thursday, and the cameras would be here ready to film the event on Monday. I checked websites and made phone calls and in the end, the wonderful volunteers and staff at the National Ability Center in Park City helped us make it happen!


Prior to losing his leg, Dale was an avid skier. We used to be caretakers of a Lodge that was located right next to Sundance Ski Resort. For two of the three winters we lived there, Dale would ski out our back door and down to the lifts. After losing his leg in May of 1992, he realized he couldn't "do it all" and decided to focus his recreation (and profession) on paintball. Skiing would have to wait. And wait. And wait. And after many years you pretty much figure it'll never happen. We knew there was equipment (outrigger poles) and such, but we didn't know the details. With busy lives and not much "extra" money for something as expensive as skiing can be, we just left the idea to gather dust in the corner.


For those of you that have learned to ski (and those of you who haven't), picture doing it on one leg with cameras and microphones all around. It's humbling. And HARD! From the moment Dale puts his ski on and stands, he is in pain. His muscles ache and cramp and there is no shifting weight to the other leg to alleviate the pain. But he is strong and getting stronger every time he goes out there.


We are very grateful to the Torihada show, the National Ability Center, and Park City Mountain Resort for making this dream a reality. And a huge thanks to the patience and abilities of Greg and Jack (Dale's instructors).

Our Torihada Story - Part One

We have not yet seen the Torihada show that aired on tv asahi in Japan yesterday. A dvd is on its way to us. This post is simply our way of sharing what it was like to be a part of a Japanese "docu-drama." Judging from the comments on our blog and facebook pages, it appears as though it was a fun and positive show. We enjoyed the time we spent with the producer Sean (aka Tetsu), director, Ken, and film crew--Kenji, Kunihobu, Masanari, and Greg (aka Barry). By the end of our time filming, we were a bit sad to see them leave, as they had become our friends. At the beginning of our last meal (I want to say "last meal together," but it was an more of an awkward time with them recording us eating dinner), with the cameras rolling, little Ryatt offered a blessing on the food. Ryatt was sad to know that our Japanese friends were leaving and so he prayed for them, and prayed that they would be able to stay long enough for him to say his goodbyes.
So how did it go? Well, fortunately we knew they were coming. If you knew a film crew was coming to record a few days in the life of your family, what would you do? We cleaned our house, of course! And with busy lives there's never enough time, so we simply did the best we could.
Day One facebook status (posted by Rain): The Japanese tv station people asked my family to sit on our couch like we normally do. We all sat, and before they started recording they asked "Do you guys normally sit this close...?" Yes. Yes we do. Hahahaha :)
And then there was the business of waving. This time it was more than just waving at a school bus, we had an audience on the ground with us. For three days in a row. The first day they "surprised" us with their camera crews (wink wink). Dale was dressed as Darth Vader. And it looked something like this:
Later that day, they asked Dale to show them how he creates costumes so cheaply. I happen to know that Peter Pan was not a costume that Dale had planned ahead of time. At their promptings, he just "made it up" for them that day. He looked at photos of Peter Pan online. The hat and sword are just from Ryatt's toy box, and he made the "shirt" out of an old bed sheet and a hot glue gun. Oh, crafty ladies, be amazed.


Our third wave morning was Indiana Jones. From one of the comments we received, it sounds like the Torihada show included audio of Dale humming the Indiana Jones theme song. It's a family favorite. Ryatt has even been known to request it when we sing songs around the campfire (yes, we like camping). 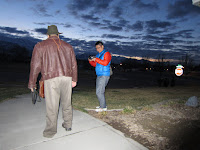 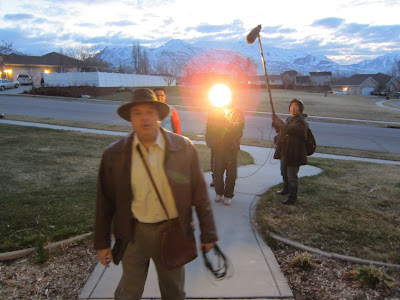 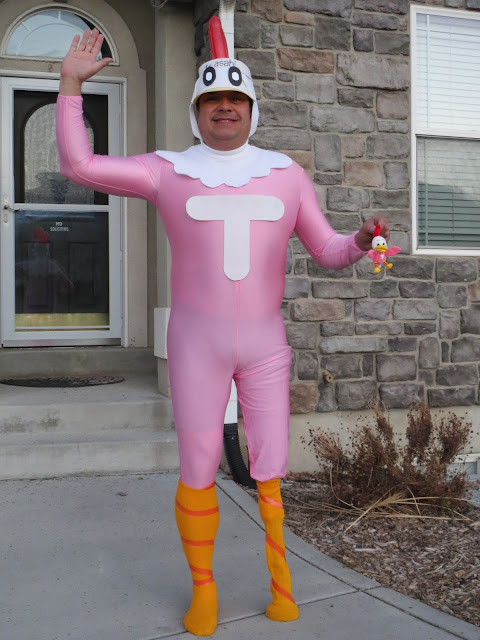 A special wave to our friends at tv-asahi and fans in Japan!

The explanation for everyone else: for today's wave Dale is dressed as the Torihada show's mascot. Torihada means "goosebumps" in Japanese. As we post this, we are currently "on air" in Japan. As we understand it, this will be a "behind the scenes" look at our family. In Japan it's called a "docudrama" here we call it "reality tv."
If we look fat, that part is all CGI. And if I said something dumb, I think it was just translated incorrectly.

Stay tuned for more photos and our side of the Japanese tv experience in tomorrow's post. 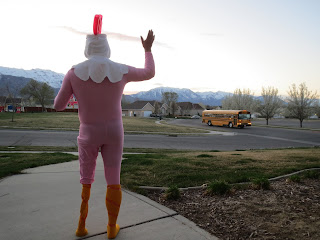 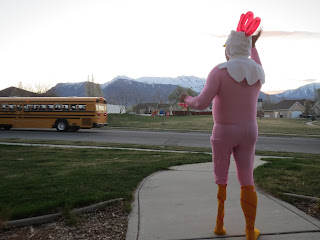 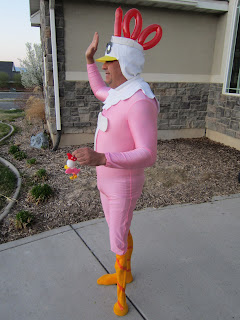 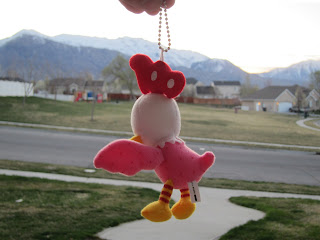