It's Father's Day! Have a Funny Day!

"What a dreadful thing it must be to have a dull father."
-Mary Mapes Dodge

Happy Father's Day! We celebrate with a few father stories from our family:

Rikki:
"I remember my dad taking me to a movie in the middle of the day when I was about six years old. We walked into the theater, and it was totally empty. My dad told me that he rented the entire theater just for me. I felt like a princess. I was so excited that I spent most of the movie running around the theater and sitting in every single seat." 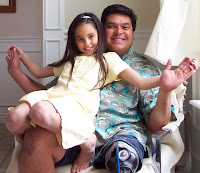 Rain:
"My dad ordered a cake for my sixteenth birthday. The cake he ordered was this little kid's dinosaur cake. I guess he was trying to embarrass me, but by now, there's not much else he can do. My cousins thought it was pretty funny, and so did the lady checking us out at Costco."

Riot:
"My dad went to my school for my birthday. He read my favorite book to my friends in my class. He was so funny." 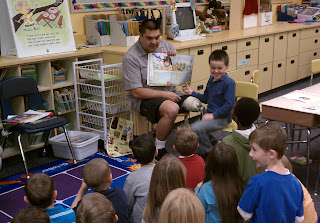 Dale:
"I was raised by a single dad, who was raising three boys on his own. He was always there for us and our countless ballgames. One year, I was playing Little League baseball as a Catcher. There was a play at the plate, and it was really close. The runner slid in and knocked me down, the Umpire called him out. The stands erupted in cheers. And then I noticed that I had dropped the ball. I picked it up quickly and nobody had noticed. I then turned around and told the Ump that I had dropped the ball. The runner was called safe and the fans went silent. That was how the game ended. Afterward, my dad told me he had never been more proud. Thanks, Dad, for instilling in me a love for sports and teaching me to own up to my mistakes. Happy Father's Day." 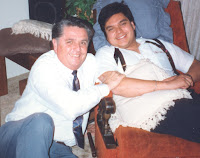 Rochelle:
My own father never waved me off to school in a costume (no regrets there). He did, however, spend many mornings helping me fold newspapers for my early morning paper route, teaching and loving through action and example. My dad had his own favorite goodbye phrase, and it continues as a morning farewell in my own home: "Have a funny day!" Thanks for your sense of humor and "knee-slapper" jokes, Dad. May all our days be funny. 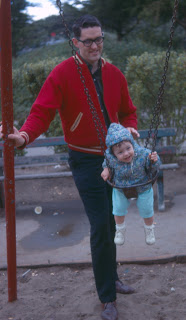