Wave At The Wife 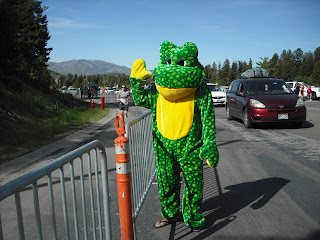 School's out. No bus. My "toad" of a husband shows his support at the Ragnar Relay.

Assuming my usual pose, I whipped out the camera and took a picture of Dale waving at me in costume. With all the crazies at Ragnar, he actually fit in quite well. For the non-running crowd, the Wasatch Back Ragnar Relay is a 192 mile foot race, with 12 person teams running day, night, and then the next day. Each runner on the team runs three “legs” of the race. I was Runner 12, so I ran Leg 12, Leg 24, and Leg 36. Dale says all this talk of “Legs” makes him jealous. Not to run one, just to have one.
Dale and Ryatt greeted me, waving their support, at Snowbasin Ski Resort. I was just finishing my first leg of the race, a nearly 5 mile climb (with over a thousand feet of climbing, ending at an altitude of 6400 feet). My next “legs” would be 6.75 miles at 4:30 am (including another 650 feet of climbing into the town of Oakley), and 7.2 miles at 3:45 pm (a scenic Park City trail run from Deer Valley Ski Resort to Park City High School).

This was my second year running this Ragnar Relay, and the thing that surprises me the most is how little the race is really about running. Maybe it's because we're not "in it to win it." I’m spending 30 hours in a van with some of my best friends (or soon to be best friends), yet I’m only running for less than three hours of that time. There’s not much sleeping going on. The hours are filled with supporting your teammates on their runs, eating, laughing, talking, laughing, some attempts at singing, followed by more laughing, and “visiting the dunnies.” [I had an Aussie on my team, teaching us fabulous slang from down under.] In short, it was just an amazing girls weekend.