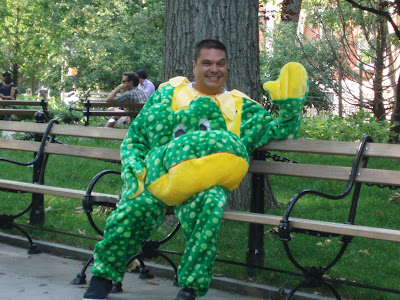 "Eat the fly! Eat the fly!"
Crossing the street in New York City is like a real-life game of Frogger.

I like to call this the "whoodathunkit?" NYC trip. This blog started as a way to share my funny husband with family and friends  a trip to New York and countless interviews was not part of that plan. With just a couple hours notice to get on the plane, Dale and Rain spent two days in New York City for their appearance on Good Morning America. While there, they were also able to interview with CBC TV (Canada), Inside Edition, FoxNews.com, Fuji TV Network (Japan), and RTL Television (Germany). Our German friends provided Dale with this fantastic frog suit and had him waving at spectators in the park (Rain said it was funny!). 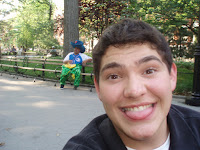 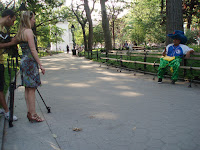 Dale managed to find a bus to wave at. Rain was NOT on this bus (NYPD): 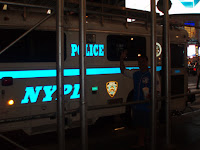 Other photos from their "whoodathunkit?" NYC trip:

Our other kids didn't get quite as much media attention, but they were featured on our local ABC station the night before the GMA showing (cute interview).
Update 6/13/11: Dale is out working in the yard and a neighbor stops by, congratulating him on the recent publicity. Neighbor asks Dale, "So what are you doing now?" Dale looks down at the pooper-scooper in hand, back at the neighbor, grins and says, "livin' the dream."
Posted by Ro at 8:25 PM