Last week Rain had the opportunity to attend a multicultural event at Brigham Young University (BYU). From BYU's website: "SOAR, or Summer of Academic Refinement, is a five-day college preparation program which prepares and informs students of the educational benefits and expectations at Brigham Young University." The program is for high school students who have finished their Junior year, as a way to encourage and prepare them for college and the college application process. The week wraps up with the students taking the ACT on Friday morning, a banquet with parents Friday evening, followed by a dance Friday night (after the parents leave).


As we left the banquet we drove through the dorm parking lot where Rain and his new friends were staying. We could see the light on in his room as the guys were preparing for the dance. I called Rain's cell phone as Dale hopped out of the car: 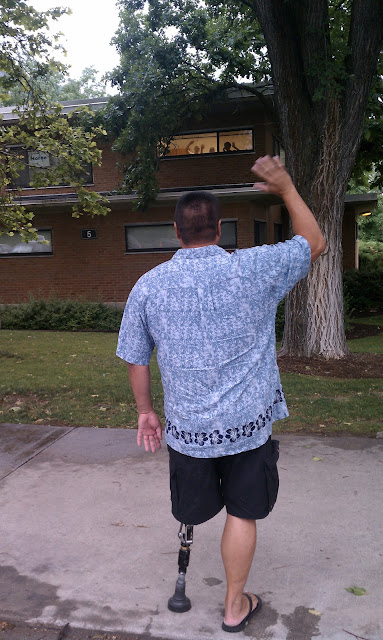 I hope we get to wave at the BYU dorms in August 2013. And Rain still likes us well enough to wave back. Rain's senior year is about to begin...
Posted by Ro at 5:00 PM 3 comments:

It was a busy "holiday" week for us. I intended to post this on July 5th, after we were done with our Independence Day celebrating, but we ended up spending that morning at the Emergency Room with Rikki. Maybe she will write a post for us about her close encounter with a spider and her sprained ankle and fractured wrist. She is doing much better now, hobbling around, but she appears to be healing well. We'll just leave it at that. So, a week later, you can hear about our holiday...

We began our 4th with... you guessed it, another parade! Provo, Utah hosts the annual Freedom Festival this week. You can check out a news story on it here. The Grand Parade is an event that attracts over a quarter million spectators along the two mile parade route. I rode my bike to the parade and watched and waited for the American Fork HS Marching Band. Because I hadn't "camped out" and staked my area out hours ahead of time, I had a fairly impaired view of things. I did have the bicycle advantage, however, and was able to jump around a few blocks and watch the band pass from a few different locations. Here's a video I put together with some of those clips (thanks to a fellow band mom for the higher quality first portion of it, my cell phone camera just wasn't cutting it).


After riding my bike home from Provo our family went swimming at the local pool (er, no photos). Then Ryatt and Dale decorated our "Flag Cake." It was a hit! 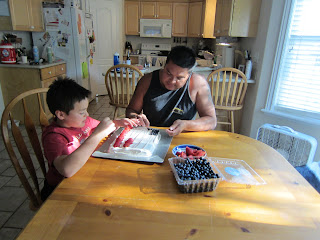 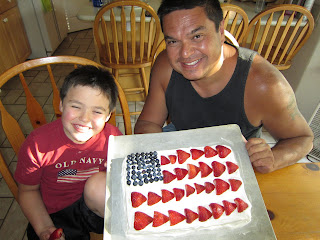 
We know summer is here when we spend our Saturday mornings sitting on the curb of various small town Main Streets. Our first parade of this season was in our neighboring city of Lehi, Utah. Lehi was famous for being the site where the original Footloose movie was filmed in 1984. We "set up camp" in the intersection next to the post office.

Rain is starting his Senior year of high school next month, so this will be the last time he marches with the band in each of these parades. As for us? We just smile and wave! (and cheer!) It's Rain's turn to wear a costume!
Posted by Ro at 12:10 PM 2 comments: